Periwigs or perukes were worn until the middle 1770’s, their popularity waning in the private sphere during the reign of George III.  Public figures, however, including men of the judicial bench, clergy, and the Speaker of the House of Commons persisted in wearing wigs for decades thereafter.  In fact, one record establishes a episcopalian bishop donning faux hair until his death in 1860. 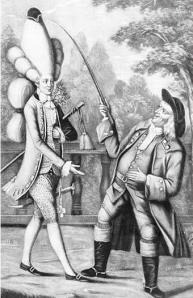 As you can see from the above caricature, wigs were part of the cumbrous fashion ensemble, often towering and expansive, and as such, required judicious upkeep.  Enter the odd object below, the wig-curler.  Made of clay, it was heated as one would curling tongs, tapered toward the center to retain the best possible curl.

The following is a wig description from George Clinch’s English Costume from Prehistoric Times to the End of the Eighteenth Century: Also, here’s a sampling of wigs from a French Perruquier (wigmaker) if you’re curious.

For more information regarding wigs of the period, American Revolution, despite its misleading name, is a font of knowledge on 18th Century French and British costume.