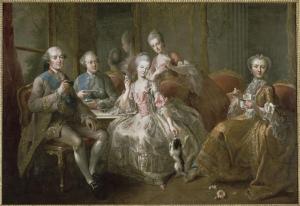 Around 1657 a Frenchman opened a shop on Gracechurch Street in London where he sold chocolate, exotically advertised “as a West Indian drink [which] cures and preserves the body of many diseases.”   The French, ever more sophisticated than the English, had been drinking chocolate since the early 17th century, touting it as a remedy for many ailments.   Not everyone was a fan, however.  Madame de Sevigne commented on its excessive popularity throughout the court at Versailles in a letter to her pregnant daughter during the year 1671, warning “the Marquise de Coëtlogon drank so much when she was expecting that she gave birth to a little boy, black as the devil, who died.”  Clearly, a woman of sound sense.

Despite such declarations, hot chocolate was an exalted beverage among the upper classes.  It was taken daily by Louis IV during his public morning ablutions and Madame du Barry notably gave the aphrodisiac, mixed with amber, to stimulate her lovers.  Marie Antoinette likewise indulged, arriving on French soil with a personal chocolate maker in tow.  Adhering to a common 18th century recipe circulated among the wealthy, vanilla and sugar were mixed with cocoa paste to create a sweet, drinkable chocolate similar to today’s darkest chocolate, if a little more bitter.  It wasn’t until 1727 that milk was added, creating the creamy confection we know as milk chocolate.

Variation in chocolate recipes is almost endless, but many were imbibed for their powers of remedying illness or seducing would-be lovers.  Marie Antoinette created a most noble position at court, Chocolate Maker to the Queen, and as such had quite the arsenal at her disposal.   Her recipes included, “chocolate mixed with orchid bulb for strength, chocolate with orange blossom to calm the nerves, or chocolate with sweet almond milk to aid the digestion.”   “Chocolate a la capucine,” though not credited to Antoinette, would have proved useful to French court ladies, who were beginning to suffer abuse over fattening their bottoms with too much chocolate.   All one needed to become svelte was “4 oz. of chocolate, 6 oz. sugar, eggs beaten well and a good half-litre of Madeira!”   Consume at breakfast and don’t eat until dinner. . . because you have probably passed out. (The Temptation of Chocolate).

Back in England, coffee houses were rivaled only by chocolate houses, tea having yet to fully hit the scene.  One of the most famous establishments was Cocoa Tree, a gentleman’s club at 64 James’s Street.  Of note, the 19th century poet Lord Byron was a distinguished member, as well as a number of prominent Whigs in the earlier part of the 18th century.  White’s Chocolate House, as seen below, was also fashionable among the younger set.

Consumption of chocolate, along with every other luxury enjoyed by the rich, dwindled in France during the French Revolution.  Still, during the royal family’s Flight to Varennes in 1791, Marie Antoinette refused to part with her silver chocolatière.  The original service contained “one hundred items made of silver, crystal, porcelain, ivory, ebony and steel.” Spectacularly useful after the loss of one’s head, I’m told.

For more, make sure to check out:

Chocolatier to the Kings of France, particularly Pistoles of Marie Antoinette

5 thoughts on “Hot Chocolate in the 18th Century”