How a Chilean Strawberry, a French Explorer, Queen Marie Antoinette, and the Contemporary Sparkling Wine, Fresita, are Mysteriously Intertwined

Frezier:  the evolved surname of the Frazer family whose ancester, Julius de Berry, was knighted in 916 by Charles the Simple for bearing a fistful of strawberries when visiting the king of France.  King Simple, enchanted by the sweet gift, bestowed the family with a coat of arms showing three fraises.  Fast forward to a chance discovery of Chilean strawberries 796 years later and we have a family steeped in berry tradtion.

As an explorer, a military engineer, mathematician, pyrotechnic enthusiast and reputed spy, Frezier was one busy fellow.  Among his lengthy contributions to society, however, he is most noted for introducing five new and lovely varieties of Chilean strawberries to 18th century France.  Familiar with the native woodland strawberry, which was small and delicate, the French were destined to go crazy over the large, though if not as superbly flavored, fruit for Frezier returned to the royal court in 1714 and showed Marie Antoinette his favorite way of consuming it.  A fashionable libation was thus born.

As a wise Frenchman once said, “You say no to champagne, you say no to life.”  Well, Frezier might have refined this as, “You say no to strawberries and champagne and you must be a Spanish pig-dog.”  You see, in the aims of increasing France’s importance in the New World, Frezier was sent on a mission two years earlier in 1712.  The then lieutenant-colonel sailed for Chile on a mission of the upmost importance: reconnaisance.  Traveling by way of a merchant ship, he posed as a merchant captain and set to work visiting Concepcion’s military fortifications where he conceived nefarious plans such as which ports to use to best mount an attack, where to store arms, and how to escape by secret route. Fortunately for French gourmands, part of his extensive work included recording the flora and fauna of the region, among them the Fragaria Chilenosis.  Or Chilean strawberry. 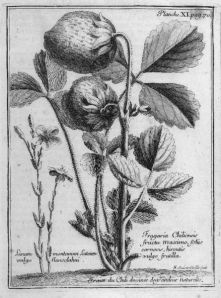 In carrying on his family’s tradition, Frezier inspired something we can enjoy today and although I’ve yet to try Fresita wine, I can just imagine myself as Marie Antoinette, delighted by a strawberry floating in a flute of champagne.