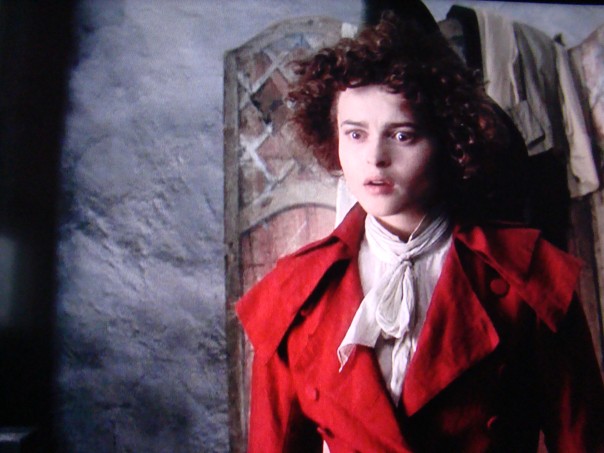 The redingote costume above is a close replica of George Morland’s engraving, The Squire’s Door, 1790 (below).  Bonaham’s version has been given an extra ruffle at both the collar and the jacket’s hem.   Most other redingotes around this time period use a single floor length coat instead of what appears here as a separate jacket and skirt, although it could very well be one piece.  Take note of the plain style cravat instead of the elaborate ruff worn by the women below.  The  modified tricorne hat is also pared down and the hair looks to be clubbed, or tied back, with a black ribbon.  Both of these styles are very masculine and as such, atypical on a woman.  A little artistic licensing done here to illustrate independence in the character.

Lady Worsley (above) made the redingote famous by wearing this regimental riding habit while camped with her husband and his South Hampshire militia at Coxheath in 1778.  As Coxheath became a gathering place for the ton with the likes of the fashionable Georgina, Duchess of Devonshire, Lady Clermont, Lady Jersey, Lady Melbourne and Mrs. Crewe all dressed en militaire to suppord their husbands’ cause.  Sir Joshua Reynolds painted Worsley in 1779 after his visit to Coxheath.

Line drawings of the redingote’s evolution can be found at Fashion-Era, from the early 1700s to 1895.

File this under too cute.   Marie Antoinette with creatures and main courses in her coiffure–love it.  If  the concept doesn’t ring a bell, these art prints are a spin-off of Antoinette’s famous la belle poule.  You know, that ship she wore on her head to commemorate the defeat of the British frigate Arethuse on June 17, 1778.  Ocean offers them in prints or in sets of 6 cards.  While you’re there, make sure to check out her Le Chapeau series where Antoinette wears tarts on her head. 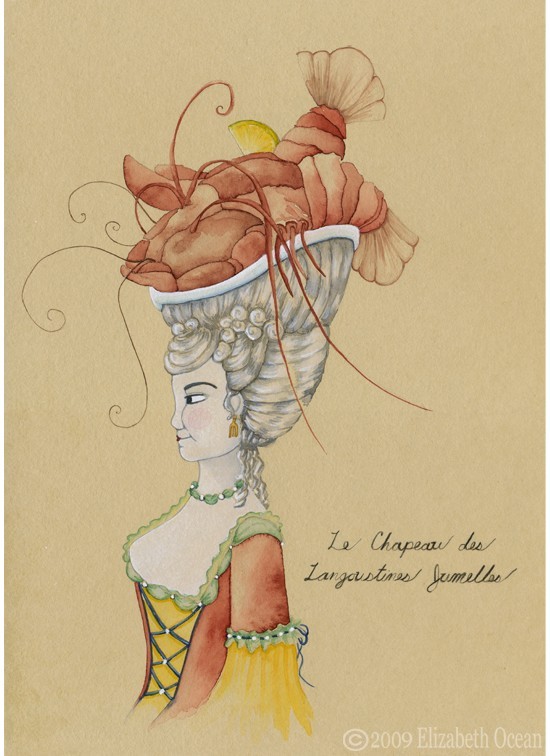 On account of a rapidly moving screen, these movie stills leave something to be desired but bear with me, it’s worth the squinty eye I’m going to force upon you.  Helena Bonaham Carter, right, wears an amazing post 1789 Fall of the Bastille gown here.   It’s the sort of gown one wouldn’t have seen before this period.  First of all, it’s striped with huge pink revers (lapels showing the lining facing out).  Second and third, a matching pink stomacher, which I suspect is more of a corset, sports an exaggerated upside down triangle design and the petticoat is not just peeking out, it’s front and center.  Whatever’s dangling from her waist reminds me of a man’s fob, but upon closer review, I think they are silhouettes.  Either that or she’s wearing sentimental trinkets displaying a favorite person or thing.   From an historical perspective, these initally grew in popularity thanks to Marie Antoinette and her elaborate poufs and of course, were similiar to carrying a beloved’s miniature.

The French Revolution brought about numerous fashion changes including a preponderance of stripes.  Why, you ask?  Stripes were the outgrowth of the patriotric “constitutional costume” and openly displayed one’s support for the fall of the ancien regime.  The national symbol for the revolution, the tricolor cockade, were concentric stripes, red, white and blue.  Working class women wore striped skirts.  San-culottes and men of political affiliations donned striped stockings.  The list goes on and on.

If you are so inclined, The Devil’s Cloth: A History of Stripes can fill your head with more than you ever needed to know about stripes, from the 13th century onward!

Mary Shelley’s Frankenstein (1994) is a surprisingly rich costume resource.  The gowns worn by Helena Bonaham Carter stretch the period of 1773 to the mid 1790s, this particular pink froth representative of the 1780s.  It has the typical 3/4 length sleeves, the lacey engageantes, and ribbon/embroidery on either side of the stomacher.  Of note, the gown’s color is on the bright side, a salmony pink, which would have been worn by the gentry as rich dyes flaunted their dear expense.

The row of échelles (literally “ladders” in French, sometimes spelled eschelles in English) down the bodice is one of Madame de Pompadour’s contributions to fashion.  Although it’s hard to see from the picture above, the bows decrease in size down the length of the stomacher, emphasizing the slender tuck of a woman’s waist.  They were a popular adornment for the period, worn well past the time of Pompadour’s death in 1764.

For being France’s Controller General of Finances under the luxuriant reign of Louis XV, Etienne de Silhouette was a rather stingy fellow.  After stepping down from his governmental job after eight short months, he purportedly decorated his farmhouse with black paper cut-outs to save on expense.  Before his name coined the style of one-dimensional self-portraits in the 19th century, however, à la silhouette was a slam against his frugal ways, one of which suggested the country alleviate their massive debt by taxing the tax exempt First and Second Estates.

Although silhouettes had been around for a long time, usually called shade or shadow portraits, it was their more elegant cousin, the miniature portrait, who was getting all the attention.  Around  mid 18th century, the expense of miniature portraits continued to prove prohibitive for all but the wealthiest and shade portraits, where one’s profile was limned from their shadow, delighted the masses.  Since all one required was light shone past a profile, the shadow on a wall replicated by hand, this new art was easy to acquire.  Among both fashionable and common, shade parties became de rigeur and soon almost everyone was distributing their unique likeness.

Machine on which to draw silhouettes

As with anything else, embellishments appeared once the art was in possession of the masses.  Aristocrats would affix precious gemstones around the frame and have the silhouette painted on glass, ivory, or plaster instead of plain paper.  The technique also evolved from the natural silhouette, shaded in unrelieved black, to silhouettes with whimsical details and variegated shading.  Men’s silhouettes tended to be simpler, but for the ladies, a lace bertha might be added to a collar, a magnificent coiffure to frame her face.   After centuries rule of designings dinner services with their crests and custom patterns, royalty even started slapping their silhouettes onto plates so their respective guests could always be reminded of with whom they were dining (as if that fact could be easily forgotten!). 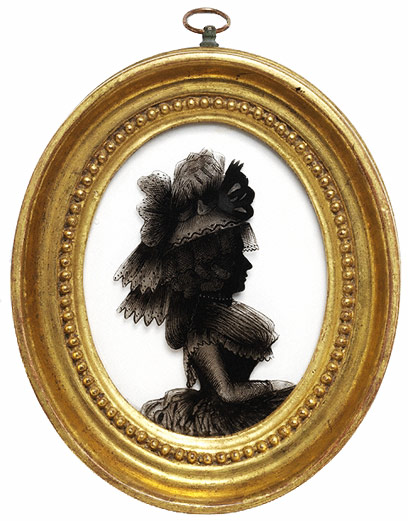 If you’re interested in individual silhouette artists, check out Shady Ladies: Female Silhouette artists of the 18th Century where you can read about Mrs. Isabella Beetham, the most prolific female artist in her day.  John Miers, as her male counterpart, was considered the finest 18th century silhouette artist.

The gown is made of luxuriant silver silk, with lace sleeves and a lace bertha around the neckline.  Embroidered golden eagles serve as the repeated pattern throughout with ermine trim at the hem.  The blue sash, worn from the right shoulder to the waist, represents the Order of St. Andrew the First Called and is principally bestowed upon the royal family.

Her specially commisioned crown is a byzantine throwback, with two half-spheres joined by two rows of pearls and a garland of oak leaves and acorns.  It contains a whopping 4,936 diamonds and a giant 415 carat ruby perched on top.  Good thing the queen had a strong neck! 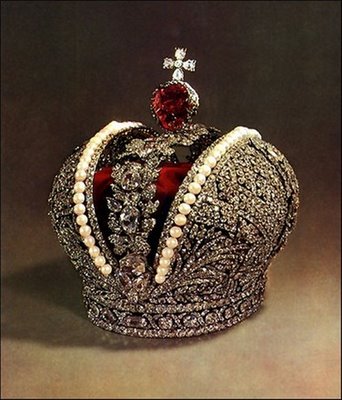 Today, Catherine’s coronation gown is kept at the Kremlin Armoury. 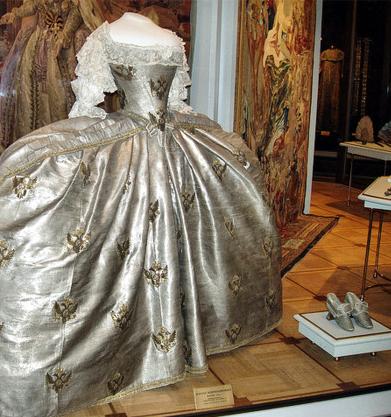 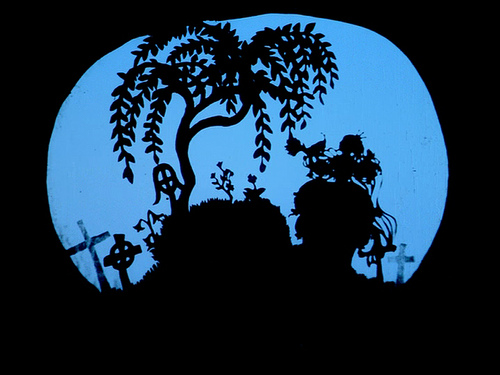 An artist working in the 20th century, Lotte Reiniger found her inspiration in Chinese shadow puppetry.  In 1926, she pioneered silhouette animation(take that, disney!) by creating the first full length animation film in, The Adventures of Prince Achmed.  To say it’s beautiful is an understatement.  However much our modern eyes are used to 3D, Reiniger’s early images still retain their ability to whisk viewers away with evocative fairy tale landscapes, spindly gossamer creatures, and intricate storyboards.

Watch The Art of Lotte Reiniger if you’re of the particularly curious or visual sort.  Otherwise, here follows the rundown.

Her technique, if time-consuming, is charmingly simple:  black cardboard cutout figures, assembled piece by piece and pinned together by wire hinges at joints to allow for movement.  The figures are then reinforced with flat lead pieces,  finished by rolling it flat, and placed on the animation table which is essentially glass, transparent paper, and atop that, the silhouettes.  Light is shone from underneath, all other light extinguished.  The figure can now be manipulated, the shot, taken, then the action repeated until the scene is captured. 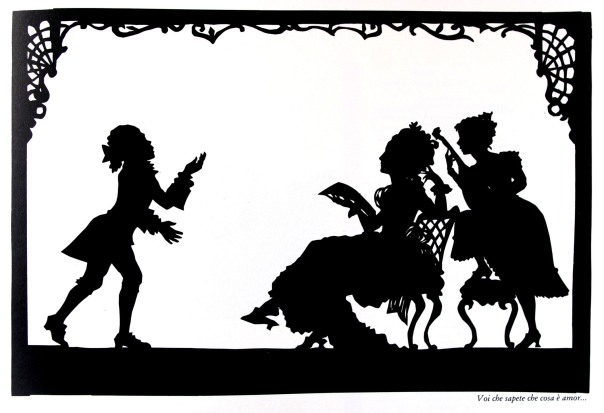 In motion, the silhouettes remind me of pinocchio,loose limbed, but instead of being clunky, their movements possess fluidity.  Even static, they are wonderful to see. 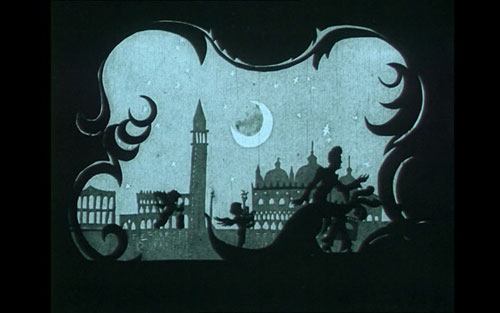 The labor required for Reiniger’s silhouettes was incredible–not only did she draw the figures, planning for scene and movement, she cut them out by hand.  Lazy me can’t even write in my journal for five minutes without getting hand cramps!

Anywho, come back later this week for a post to learn more about silhouettes!  Their origin resides in the 18th century where partygoers used to amused themselves with this delightful pasttime. 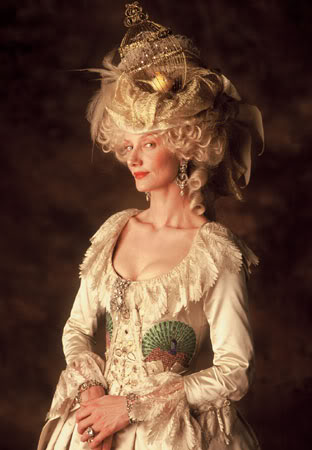 Much creative license is taken with this gown, worn by Joely Richardson as Marie Antoinette in Affair of the Necklace, but it’s an amusing recreation so I thought we’d examine it anyway.  First of all, are those peacocks on bodice?  A golden cage in her hair?

Antoinette was notorious for bringing whimsical fashions into style, wearing such props as birds, boats, and bows, often to towering effects.   Although restraint is applied here, I can’t help thinking Antoinette looks like a creamy, strutting cake.  And as for the golden lump of fabric upon her head? It resembles a turban gone horribly wrong, wrapped by a cackling opium eater (which begs the question: do delirious opium eaters cackle? *sigh* Another day, another curiosity!).  A brooch at her bosom, leafy engageants, and chandelier earrings complete the ensemble.

By the by, I can’t wholeheartedly poke fun at the earrings as Girandole (a chandelier-esque style named after crystal-pendant candlabra wherein three oval stones dangle at the bottom, the middle being slightly lower than the outer two) earrings were popular during the 18th century.

A stunning 1780s recreation in the redingote style complete with a Gainsborough hat, aubergine riding coat, kid gloves, and what looks to be an embroidered cotton or linen petticoat.  This ladies’ redingote is a bit usual given the coat is short rather than being full length.  This allows the petticoat to take center stage.  Interestingly, redingotes for women first appear in the latter 1780’s so Spooner is on the mark!

As a side note, Romola Garai’s hair here is absolutely perfect for the period: large sausage curls trailing over her shoulders, smaller curls teased in a bouffant.

I stumbled across some jewelry art made by Jewelera on Etsy and be still my heart, her creations are gorgeous! 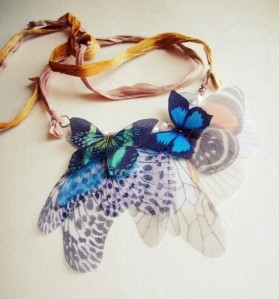 A perfect way to wear springtime around your neck, don’t you think?