When I was a little girl, I always thought this song sort of silly.  Yankee Doodle.  First of all, ridiculous name.  Split it into a noun and a verb and it becomes positively mystifying.  Yank was how my Georgia-born grandfather referred to me when I asked him about the “aggressor” in the American Civil War and doodle was what I did when I absolutely, for the dozenth time, feigned total lack of spelling comprehension so I wouldn’t have to partake in the spelling bee.

Then there’s the “A-riding on a pony” part which is just as confusing as the first bit.  I mean, come on!  What man in his right mind a-rides on a pony without losing all sense of dignity?   Exactly my point.  And feathers?  Mortifying.  Feathers belonged not to a hat but to boa wrappers and old ladies who wore magenta lipstick that smeared on their teeth when they smiled.  Calling “it” macaroni (whatever “it” was) merely exacted the mortal blow that prevented me from singing this ditty.  After all, a little girl who likes to roll unfamiliar words off her tongue can only be so careless before she’s kicking her heels against the naughty chair in detention. 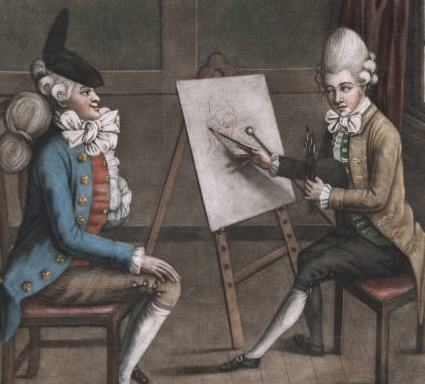 But back to how Yankee Doodle gets equated with macaroni.  Late in the 18th century, an establishment called the Macaroni Club was formed wherein a London dandy could nosh on pasta, strut his affected airs, and in general, be fabulous.  Card carrying members (okay, I don’t really think there was a card) consisted of gentlemen who had gone on a continental Grand Tour and returned with a passion for all things Italian.

Given their outrageous sartorial choices including the much caricatured club wigs with shruken Nivernois hats, the French-style red heels and striped stockings, not to mention the occasional thrown in parasol and sword garlanded with ribbons, “macaroni” quickly became a choice insult for unmanly behavior.  Homoerotic connotations abounded and gender boundaries blurred.  If a fellow was proclaimed a Macaroni, he was not only a peacock of fashion, but weak, effeminate, and altogether contrary to stereotypical masculine authority.  Perhaps worst of all, in the insular minds of proper Georgian Englishmen, he was a xenophile. 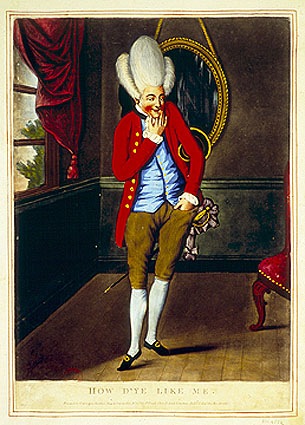 At a time when France and Spain were aggressively encroaching on British territory and the American colonials were stirring in their breeches, possessing continental sympathies was akin to being unpatriotic. Britain didn’t become an empire by imitating Italy.  Well, actually they did.  It’s called the Roman Empire, but that’s ancient history, long forgotten, rubbish, rubbish.  Point is, stiff upper lips shuddered at what these fancy poodles were doing to their country’s reputation.

Fortunately, a solution soon arrived where dandified Londoners weren’t the lone targets of mockery.  Enter the Americans. During the Revolutionary War, British soliders ridiculed the unkempt colonials who thought it the height of fashion to stick feathers in their hats and how better to unman the enemy, I ask, than by breaking out into song?

Yankee Doodle keep it up

Mind the music and the step

And with the girls be handy

P.S. Still wondering how a Yank doodles his dandy? Doodle, as used in the ditty, refers to a fool or simpleton. In the early 18th century, however, doodle was also a verb, as in “to swindle or make a fool of”. A derivation of the German word, dudeln, it is possibly the root for the modern American “dude”.