If a strong, serious profile makes the man, Lord Stratford Canning is made.  A bit stern of lip, perhaps, and knife sharp of nose, but this fellow has an intensity about him that draws the eye.  Most amusing to me, he actually looks uncannily like an ex of mine, which if I had no respect for his privacy, I would share.  Strange to look at a 19th century face and see a likeness–you would be dumbstruck by the resemblance, I’m telling you! 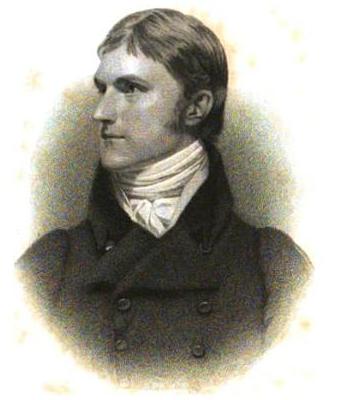 Lord Stratford Canning, 1st Viscount Stratford de Redcliffe, is 29 in this 1814  portrait and didn’t ascend to the peerage until 1852.  During his lifetime, he was most distinguished as a diplomat wherein he traveled as far as Washington and Constantinople.  He served as ambassador to the Ottoman Empires three times, his first appointment commencing during the Napoleonic wars, and although he was appointed Russian ambassador in 1832, Tsar Nicholas I didn’t think kindly to meeting him.  He was never received and the snub affronted all of England.  England’s foreign office subsequently refused to appoint a new ambassador, assigning the lowlier position of charge d’affaires instead.  The reasons for the Tsar Nicholas’s resistance can be explained by the danger the viscount posed.  As ambassador to the Ottoman Empire, he was well seasoned regarding Russian’s interests in the East.  Russia, fearing his politcal influence, prefered to work with a gentleman who had less intelligence on her foreign affairs.  The strength of the viscount’s personality was also a knock against him.  He was known for his “quick feelings” and “outspoken frankness” which had made him unpopular, among others, with the Russian ambassador’s wife.

Anglican Church, aka Crimean Church, in Istanbul of which Viscount Stratford de Redcliffe laid the foundation

As a result of his career, the viscount was infrequently in England.  He owned a townhouse in Grosvenor and called London home.  Based on what I found in the Gentleman’s Magazine, it appears the viscount was short-changed by his grandfather in regard to inheriting the family estate of Garvagh.  The estate was unentailed, the process of which I am very much in the dark about, and passed to the viscount’s uncle–a younger son–instead of directly to his father.  His father, Stratford Canning, was an Irish member of a banking and mercantile firm, but the family was by no means without any aristocratic relations, if still green around the edges.  His first cousin (the fellow who inherited Garvagh in Londonderry, Ireland) became 1st Baron of Garvagh in 1818 and had a mesalliance with the actress Mary Costello, whom he eventually married.  He later served as prime minister.

In regard to romance and marriage, the viscount wedded twice.  By all accounts, he loved his first wife,

Although he had children, the viscountcy went extinct with his death.  His first wife died without producing an heir and his only son with his second wife failed to have children and died before his father.

For an in depth look at the viscount’s fascinating life, including 19th century political matters and selections from his personal memoirs and letters, see The Life of Lord Stratford de Redcliffe.