A tinder box looks very much to me like an object to inspire cursing.  It is comprised of a piece of steel with a handle, rough splinters cut to points and smeared with brimstone, a piece of flint, and bits of torn linen, blackened to encourage easier lighting.  The tinder box itself bears a dampener or lid to snuff out the tinder once its lit. 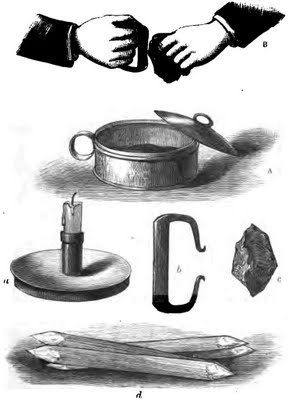 An account from Ballou’s Monthy Magazine from the late 19th century describes the bygone morning and evening  lighting ritual: 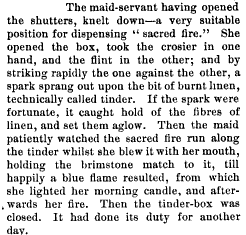 In the 1830s, the tinder box was replaced by the vesta or matchsafe, the safe referring to the solidity of the box as early matches were given to self-ignite–not quite to the thing to have tumbling about naked in one’s pocket.  In most cases, the vesta was not actually a box but more like a case with a flat hinged lid and a striker at the bottom.  Plain, undecorated vestas were the most common, but the aristocracy and the well-to-do carried cases in gold and silver with intricate plate designs.  Examples of figural vestas are rare, like this elephant from Antiques Atlas, which hails from the 20th century:

Matches weren’t even invented until a curious chemist named John Walker created a “friction light” by swiftly withdrawing a tinder coated in antimony sulfide, potassium chlorate, gum, and starch from within a piece of folded sandpaper or other abrasive material.  He put them to market in 1827, calling them congreves, but Samuel Jones, a more enterprising fellow, improved the matches by adding to the tip a glass bead of sulphiric acid and flammable paper.  Crush and blaze!  He patented his tweaking and sold them under the catchy name “lucifers”.

Charles Sauria, a Frenchman, created the phosphorous match in 1832, a advancement that caused many accidental fires as it ignited upon frictional contact with almost anything.  It also had the unfortunate ingredient of white phosphorous that, while masking the odor emitted with Walker’s matches, contained enough of the chemical in a single package to inflict phossy jaw on the user.  As phossy jaw is a condition involving necrosis, one can imagine this wee little side effect did not go over well.  Abscesses, swelling gums, and tooth aches begone.  1898 arrives and a safety match tipped with phosphorus sesquisulfide and potassium chlorate is patented.  Modern fire with the flick of the hand is born.