It all began with a gentleman who liked blue tights and intellectual women.  That’s right, ladies and gentlemen.  The term “bluestockings” was used to categorize the elite female members of England’s smarty-pants club, and it was named after a pair of gams.

You see, once upon a time in the 1750s a lady named Elizabeth Montagu sought to make her home on Hill Street the intellectual capital of London.  She was to be England’s answer to the French salonnière, an aristocratic/upper bourgeosie hostess of late hour assemblies where men and women gathered on equal footing to discuss society’s fashionable arts.  From the written word to the painted embodiment, London’s distinguished came to discuss whatever was itching society at the present moment.  And unlike other club atmospheres of the day, it was a society undressed, the Georgian answer to casual attire and debate en famille.

For a club geared toward the intellectual expansion of women, its attendees were also prestigious.  On any given evening, one might encounter Samuel Johnson’s high-reaching troop including Oliver Goldsmith, Edward Gibbon, Sir Joseph Banks, David Garrick, Adam Smith, and many others. 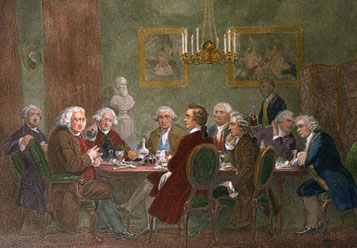 But there was only one man who wore blue stockings or so the legend says.  He was purportedly a philosopher who minded his economics over his fashion sense (ever an admirable trait among the enlightened).  Blue worsted stockings were cheap compared with bleached or black silk and he sported them on his frequent visits to Hill Street, flashing his legs at Montagu’s get-togethers whenever he was in the mood for a bit of high-minded chatting. 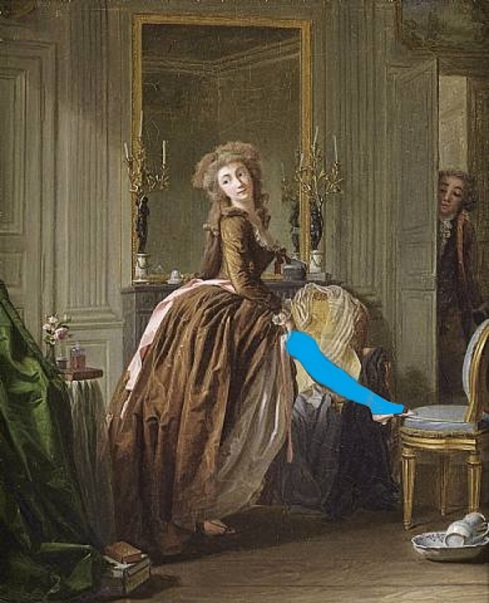 As with many clubs, the bluestocking ladies were in constant transition, attending by the year and the inclination.  In the beginning they included Frances Boscawen, Elizabeth Carter, Catherine Talbot, Elizabeth Vesey, and of course, Elizabeth Montagu herself.

Although small in nature, the formation of the society was an achievement both applauded and criticized by society.  Horace Walpole called it “the first female club ever known,” and it probably was in the public sense.  Although feminine hunger for knowledge was admired and even encouraged in the highest circles of enlightened French society,  England still expected their women to uphold the traditional definition of “an accomplished lady.”  She would practice the delicate arts such as painting and playing the pianoforte, but she would not engage in criticism nor would she become a creator, much less of virtuoso.  That is not to say women failed to ascend to the heights of which many 18th century men considered the masculine landscape.  Richard Samuel’s 1779 painting, The Nine Great Living Muses of Great Britain, paid tribute to the torchbearers who led the weaker sex out of their darkened drawing rooms and into the public light. 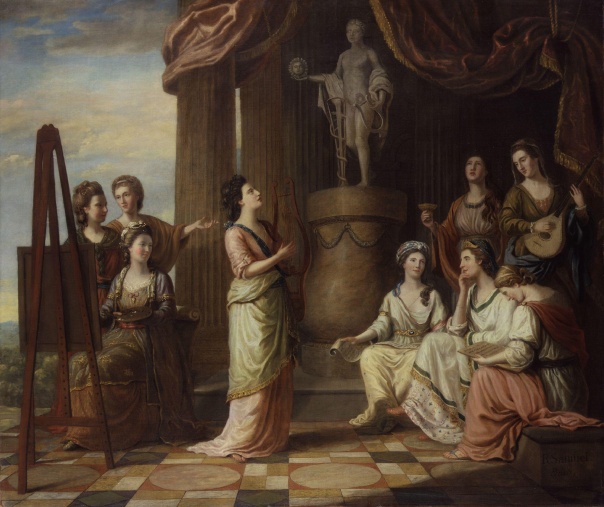 Keep in mind the Bluestocking Society gathered some 40 years prior to Mary Wollstonecraft’s Vindication of the Rights of Women and Wollstonecraft was received as a radical, though for a variety of reasons, political, social, and personal.

Over time, particularly in the 19th century where the tightening of morals and social etiquette became the norm, the term “bluestocking” evolved in meaning.  As any romance novel reader knows, bluestockings were known to shake up the natural order.  They indulged in literature when society would rather relegate them to dancing or standing for gown fittings.  Instead of playing the shrinking violet or wallflower, they opined, debated, and asserted their intellectual independence over the common pitfalls of women: restrictive marriages, lack of economy and agency beyond household affairs.  Spinsterhood was uniquely suited to them, but many of the original bluestockings were married.  They were merely women who wanted an avenue of culture and contribution, women who espoused that the improvement of the female mind would benefit society at large.  They were bluestockings and yes readers, they were amazing.

Reconsidering the Bluestocking – ten essays that “explore the Bluestockings’ social, economic, and intellectual achievements, including the publication of fiction and criticism, their plans for a utopian community, their charitable enterprises, and the management of a large coal-mining concern.”

Ever wondered how the waiting woman got her moniker?  Look no further than the trusty old book called The Bible.

18 Then Abigail made haste, and took two hundred loaves, and two bottles of wine, and five sheep ready dressed, and five measures of parched corn, and an hundred clusters of raisins, and two hundred cakes of figs, and laid them on asses.

19 And she said unto her servants, Go on before me; behold, I come after you. But she told not her husband Nabal.

20 And it was so, as she rode on the ass, that she came down by the covert on the hill, and, behold, David and his men came down against her; and she met them.

21 Now David had said, Surely in vain have I kept all that this fellow hath in the wilderness, so that nothing was missed of all that pertained unto him: and he hath requited me evil for good.

22 So and more also do God unto the enemies of David, if I leave of all that pertain to him by the morning light any that pisseth against the wall.

23 And when Abigail saw David, she hasted, and lighted off the ass, and fell before David on her face, and bowed herself to the ground,

24 And fell at his feet, and said, Upon me, my lord, upon me let this iniquity be: and let thine handmaid, I pray thee, speak in thine audience, and hear the words of thine handmaid.

The common use of Abigail as a lady’s maid also appears in  The Scornful Lady, a play from the 1616 by Francis Beaumont and John Fletcher.

The male version of Abigail?  Andrew.