Earlier this week I left you with Napoleon in Verona, depressed and a trifle desperate.  Today, he’s looking a little like this:

Josephine’s cavorting with Hippolyte Charles who incidentally does not have the makings of a weak chin.  I’m told this helps in the romance department.

To say the least, Monsieur Bonaparte is suspicious of his lady wife.  He’s gone from realizing his general awesomeness to seeing cracks reflected in his veneer.  And you see, it’s all Josephine’s fault. 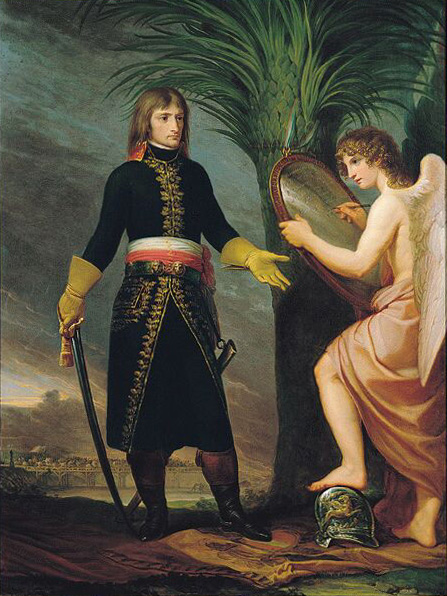 The General Napoleon by Andrea Appiani

Our little bit of muslin is just too wonderful in her own right to pay attention to her new husband who, in addition to being short, is apparently “impecunious” and “irrepressible”.  Touché, darling.

Years later on 19 December, 1805, Napoleon writes to her, “. . . I am still in Brüun.  The Russians have gone.  I have made a truce.  In a few days I shall see what I am going to be.   Deign, from the height of your grandeur, to trouble yourself a little about your slaves.”

On this day, however, this is what he has to say:

*As a complete side note, the upside of the sad-faced painting by Vernet is that it comes in a melamine plate offered by the National Portrait Gallery.  It was also mentioned in December’s Oprah magainze, if that’s your thing.  The downside: it’s £12, double the price of the other melamine face plates.  But I suppose he was an Emperor and as such large and in charge so he has to have the biggest sized plate of the bunch.

You’re going to have to forgive me about the ongoing post name in this series.  For some reason I had Billy Ray Cyrus’s Achy Breaky Heart in my head which is odd because a) not a fan of Billy Ray; and b) I hardly like country.  Hauntings of country songs past, I guess, but attributing Napoleon’s letters to Josephine a result of his achy, breaky heart has cured me of my problem.  Hopefully, I have not passed it on to all of you.