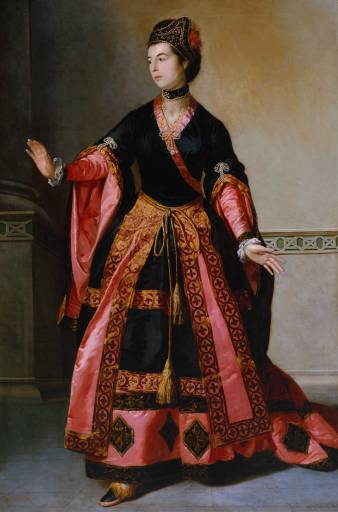 Portrait of Mrs. Yates as Mandane in The Orphan of China – Tilly Kettle (1765)

Mary Ann Yates began her career as an afterthought.  Originally criticized as a feeble-voiced, small-talented nobody–“her figure so much encumbered with corpulence” that she should be paid to stay away from the stage–she would make her critics reconsider their words.

Before Sarah Siddons eclipsed her as the tragedienne of the age, Mary Ann was a leading actress at both Drury Lane and Covent Garden.  By the time she retired at age 55, she and her husband Richard Yates had banked £36,000-40,000 for retirement.  No small sum in those days.

She had spent 31 years on the stage, debuting in Dublin in 1753 and then performing bit parts in Drury Lane’s 1754-55 season.  One can suppose she often sulked around Drury Lane muttering, “Damn that David Garrick!”  The actor-cum-theater manager was underwhelmed by her and merely tolerated her which was why, in 1756, when he refused to offer her a contract for the next season, she did what any rational young creature would do.

Her choice was prudent.  Richard Yates was a comic actor in his fifites, a widower whose former spouse (also an actress) had left him a considerable sum.  Incidentally, he was known for his ability to develop promise in his fellow actors–and he polished Mary Ann until she was golden.

Mary Ann returned to Drury Lane the same year she married, but it wasn’t until 1759, when she served as understudy to Mrs. Cibber, that she blindsided Garrick with a sly interpretation of Mandane from Murphy’s Orphan of China.  Mrs. Cibber, whose inability to perform ocassioned the opportunity, would have been displeased to discover that Mary Ann’s coup was the result of a well-laid scheme.

The story goes something like this:  When Mrs. Cibber falls ill, disagreements over the schedule ensue and a postponed premiere makes for an impatient playwright.  The hungry Mary Ann readily agrees when the playwright proposes to teach her in secret how to play the role.  At the first rehearsal, she demurs to Garrick (who highly opposes Mary Ann as a substitue) saying she is unfamiliar with Mandane.  That way, Garrick is absolutely flabbergasted at the second rehearsal when he realizes she is Mandane.

During her years at Drury Lane, Mary Ann enchanted the crowds, and for a while, Garrick was pleased.  He went on a continental tour in 1763, and despite his absence, Drury Lane flourished.  When Mrs. Cibber died in 1765, ridding Mary Ann of her only competition, Mary Ann rose to the height she had formerly dreamed of.

She flirted with a generous contract from Covent Garden for both her and her husband, and by 1767 she switched theater houses.  She was a bit of a diva at this point, and although she stayed at Covent Garden until 1771, she fought with her fellow actors and declined roles that inconvenienced or displeased her.

She left London to play two seasons in Edinburgh but had difficulty finding employment upon her return to London.  The famous playwright Oliver Goldsmith championed her work, yet still nothing came her way.  It was only after a friend and admirer of hers wrote a novel exposing what went on behind the curtain of a certain theater and with a certain *wink, wink* manager that she gained a little attention . . . and a lot of avoidance.

Garrick rightly pinpointed Mary Ann as the source of gossip, but nevertheless, by 1774 he offered Mary Ann a generous salary, hoping she might return to Drury Lane.  She replied as follows: 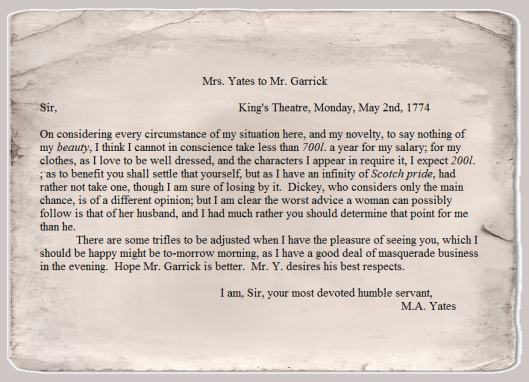 Whatever amounts they settled on concerning the letters of Spring 1774, Mary Ann bedeviled Garrick for the remainder of his life.  She missed premieres and showed up to rehearsals late or not at all.  As a “capital actress”, she refused roles undeserving of her talent, and even when she requested particular roles, she would abandon them upon her whim.

Over the years, her absences only increased and she partied hard, flitting around town from one masquerade to the next.  As Garrick had spent his career making Drury Lane a first-rate theater, he was justifiably incensed.  But this was the way with them.

Mary Ann was a talented tart; we’ve no doubt about that.  Some of her roles were so well played that other actresses refused to attempt them for the remainder of her life.  She had leagues of admirers and likely just as many critics, making her a person of great interest during the Georgian period, but why then didn’t her contemporaries write biographies of her?  Why wasn’t she the subject of national obsessions like many of her fellow actresses?

What makes one person forgotten and not another?

An 1839 edition of Bentley’s Miscellany, a literary magazine first edited by Dickens, by no means provides answers to these curiosities, but the following exchange between a pew opener and a group of gentlemen touring a Richmond graveyard is a testament to Mary Ann’s one-time popularity:

“But, surely, sir, you’ll go and see the grave of the great Mary Ann Yates?  Lord bless you, sir, more people go to see that grave more than any other in the church.”

“The great Mary Ann Yates!” said we in some perplexity; for, to our shame be it spoken, we had forgotten the name, and we did not like to expose our ignorance to the pew opener.”

“She was very celebrated,” said she [the pew opener], after a pause; “and, indeed, I’ve heard that Mrs. Siddons wasn’t anything like equal to her.”

“her figure so much encumbered with corpulence” was said of Mary Ann by Thomas Sheridan, actor-manager in Dublin

1 thought on “The Story of a Diva: Mary Ann Yates, Forgotten Actress”