This must be the ugliest mermaid I have ever seen. 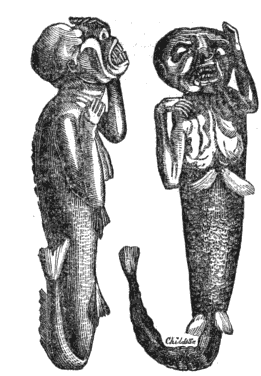 It debuted in London as a “very dry and mummy like [creature], enclosed in a glass case.”  The man responsible for the hoax?  The Bostonian sea captain Samuel Barret Eades.  Eades had purchased his mermaid from a Dutch fisherman by way of North China.  The price?  5000 Spanish dollars, a value of about 1000l. 1

The enterprising Eades acquired the funds by selling his and his partners share in the ship the Pickering–without informing the co-owner, of course.  He then conspired to fool his neighbors across the pond and make some serious bank.* When the fish with simian parts first appeared at Turf Coffeehouse in St. James’ Street in 1822, 300 to 400 persons visited daily at the price of one shilling per entry. 1  It was an immediate London sensation.  The papers of the time, including the Gentleman’s Magazine, are filled with proofs of the mermaid’s veracity.  A thorough examination was done Reverend Dr. Philip in April, 1822 and published in The London Medical and Physical Journal.  I have pulled out a few highlights for your enjoyment:

“The head is almost the size of that of a baboon.   It is thinly covered with black hair, handing down, and not inclined to frizzle…The countenance has an expression of terror which gives it an appearance of a caricature of a human face; but I am disposed to think that both these circumstances are accidental, and have arisen from the manner in which the creature met its death.  It bears the appearance of having died in agony.

“The length of the animal is three feet; but, not having been well preserved, it has shrunk considerably, and must have been both longer and thicker when alive than it is now…The canine teeth resemble those of a full grown dog; all the others resemble those of a human subject.”

Despite the mermaid’s success, Eades would eventually run into a road block: the furious co-owner of the Pickering, Mr. Ellery.  When Mr. Ellery demanded repayment of his portion, Eades threatened to flee with his mermaid.  What followed was an amusing account described in The Feejee Mermaid and Other Essays in Natural and Unnatural History by Jan Bondeson:

“In the early 1800s, it was of frequent occurrent that adventurers abducted wealthy heiresses, whom they had previously seduced, to marry without the consent of their parents.  To stop these immoral practices, the parents could appeal to the lord chancellor’s court, since the lord chancellor had the authority to make an eloped young lady his ward (a ward in Chancery); she was then not allowed to marry without his permission.  On November 20, 1822, Mr. Ellery appeared before the court of Chancery to restrain Captain Eades from moving or selling the mermaid…It is recorded that Lord Eldon, the lord chancellor, listened to his harangues with some mirth.”

In the end, the mermaid was seized by customs officials and determined a fake by anatomist and zoologist William Clift.  He deduced that the mermaid was part orangutan/baboon/fish (possibly salmon).  Eventually it was decided to be of Japanese origin.  Eades vehemently fought the decision by hiring naturalists who declared it a newly discovered species. Debates ensued, but by January of 1823 the exhibition was taken down and London was officially over Eades’s mashup creature.  This, however, was not the end of the hoax mermaid’s travels.  You can read all about it in Bordenson’s book, including where the mermaid is today and where it journeyed after Eades’s death.

*Some accounts say Eades believed the mermaid was real.  The mermaid was credited as authentic for a time, but really?  Who believes in scary ugly mermaids?